Mortimer Levitt – The Man That Made Free Concerts in Dayton Possible

Each year the Mortimer & Mimi Levitt Foundation offers a portion of operating support to help us bring Daytonians 50 free concerts. I’ll go into how that works a bit more in a separate blog post later this year. Today, I want to take you back in time to where it all started – Luna Park at Coney Island.

Mortimer Levitt was the son of struggling immigrant parents living in Brooklyn during the Great Depression. He loved to go to work with his father who was a street vendor at Luna Park of Coney Island. While there, he would stand outside the gates of the concerts and listen to the music within, unable to afford a ticket.

At 16, as many young people did at the time, Mortimer dropped out of school to help support his family. Fast forward a decade or so and Mortimer is a successful entrepreneur, making his first million in 1942 with his company, The Custom Shop, specializing in made-to-order shirts.

Mortimer met Austrian-born Annemarie “Mimi” Gratzinger a few years later and they were married in 1948. Together they shared a love for the arts and focused their philanthropic efforts on youth, performing arts, and education. 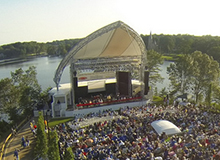 In the 1970s, Mortimer and Mimi were in Westport Connecticut, where they spent their summers when they were approached by a group of residents wanting to build an outdoor stage and community gathering space on an old, unused landfill. Mortimer and Mimi came on as the largest financial supporters, earning naming rights of the venue. With the memory of his nights spent outside a fence at Coney Island, catching glimpses of concerts he so wanted to be a part of, Mortimer insisted that all concerts at this new venue must be free. No child should feel the way he felt due to a lack of access to the arts.

Thus, in 1974, the first Levitt Pavilion was brought into existence and with it, a dream of a nation of Levitts. The Levitt Pavilion Dayton was the seventh Levitt Pavilion of a now family of eight across the United States, each offering at least 50 free concerts a summer.

From a young boy, standing outside a fence, separated from the music he loved, to tens of thousands of people enjoying concerts together, no fence in sight. The story of Mortimer Levitt is inspiring and still unfolding today although he is no longer with us. We are honored and humbled to be able to carry on his legacy here in Dayton, Ohio as we offer 50 free concerts every summer. May every child, family, and person in our city be able to enjoy and connect through the universal language of music.

Learn more about the Mortimer & Mimi Levitt Foundation at www.levitt.org.