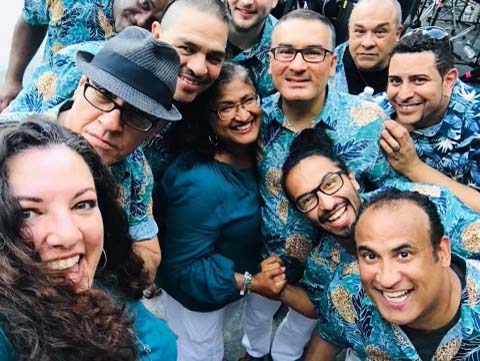 Dayton Metro Library has joined as a partner to offer additional elements to the World Music Series.  We will kick off the festivities with dancers from Orgullo Mexicano founded by Ms. Imelda Ayala.

The Cincinnati-based Latin music ensemble Son Del Caribe is widely acknowledged by both dancers and listeners as the top salsa band in Ohio. The band’s exciting, energetic, eclectic and very danceable pan-Caribbean, pan-American sound includes salsa and other styles of Latin dance music such as merengue, cumbia, son, bomba, plena, and bachata.

Son Del Caribe has been the band accompanist of big artists,who have been awarded the prestigious Grammy in Latin Music, Lalo Rodriguez and Andy Montanez. Locally, this talented ensemble has participated in concerts with international musical bands such as Grupo Niche and Puerto Rican Power.

Son Del Caribe is led by the versatile trombonist Jaime Morales, a top salsa musician from Puerto Rico who has played alongside such Latin music legends as Eddie Santiago, Gilberto Santa Rosa, and many others.